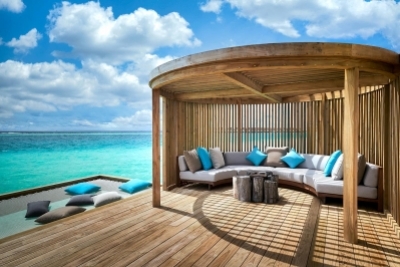 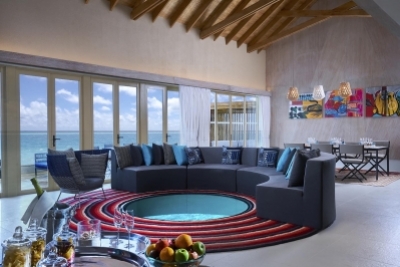 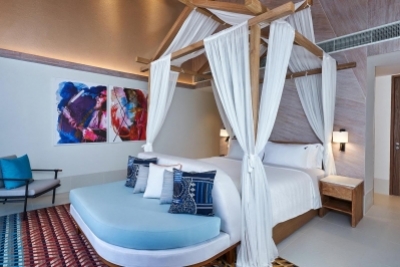 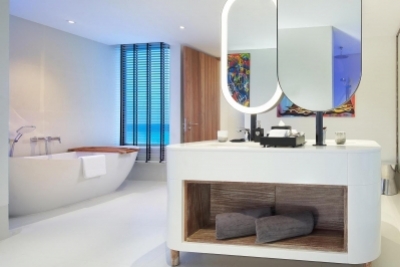 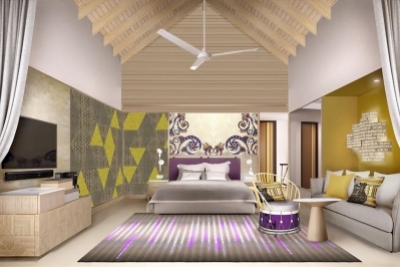 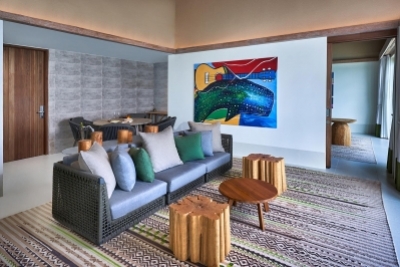 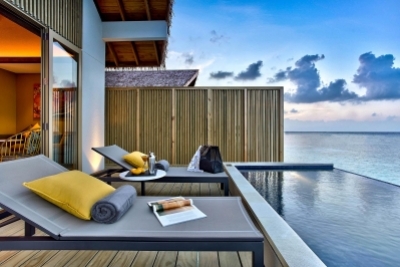 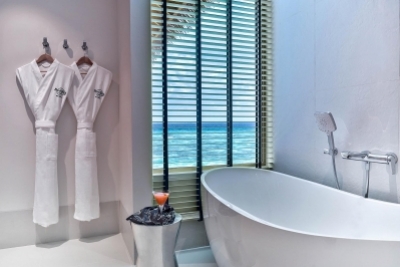 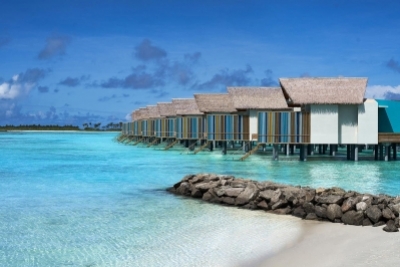 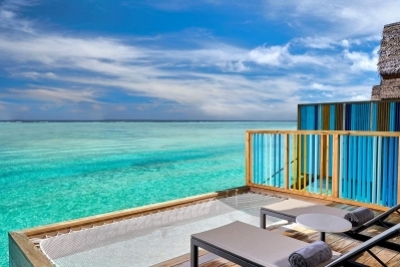 All-inclusive room rates at Hard Rock Hotel Maldives are available. These rates are higher because they include onsite food and beverages in the room rate (some restrictions may apply).

Snack and sip in a sparkling infinity pool that feeds straight into Emboodhoo Lagoon. This swim-up bar features underwater stools and tunes, a waterslide, and special menu for kids.

* EXQUISITE BEVERAGES AT OUR MALDIVES BAR

In true rock-star fashion, sometimes it’s best to cancel your plans and do nothing at all. The perfect spot to relax is the pool bar at Hard Rock Hotel Maldives. A pool by day and lounge by night, our relaxed ambience changes as the sun goes down. Enjoy an infinity pool that extends into the lagoon, with the Indian Ocean as the stunning backdrop, the coolest ever underwater sound system and the waterslide. Our pool bar menu includes Pan-Latin casual bites and a special kids menu for the little Rock Star, as they enjoy the fun-filled holiday time by the pool.

Immerse yourself in our private Chef’s Studio for 12 guests. Our open-kitchen restaurant borrows flavours and recipes from around the world for a truly unique dining experience.

* DINE AT ONE OF THE BEST RESTAURANTS IN MALDIVES

Discover the ingredient-driven menu at Sessions, where dishes are inspired by contemporary and around-the-world flavors. With a focus on freshest local ingredients, we showcase the world’s great cuisines in our open kitchen for all to enjoy. From a-la-carte menus to daily specials, this restaurant is truly the Maldives dining like you’ve never imagined. Meet up, chow down, or rock out in our private Chef's Studio for up to 12 guests with most immersible experiences.

Nothing is more classic America than Hard Rock Cafe. Eat, meet, or drink—the choice is yours.

Located oceanfront at The Marina @ CROSSROADS, just a short walk from the property, Hard Rock Cafe Maldives offers a taste of life on the red carpet, complete with nightly live music, legendary music memorabilia, classic cocktails, and a full menu of fresh, handcrafted American classics. Head here for an intimate get together, or go big and take over the entire floor for an unforgettable event for up to 190 guests. Now that’s rock and roll.

For exclusive, unrepeatable dining experience at Hard Rock Hotel Maldives, allow us to arrange for private dining on the beach. We’ll hit all the right notes with a style that’s just right for you, from a set menu to barbeque-style or a totally custom menu

TOO LAZY TO LEAVE THE ROOM

At any hour of the day, enjoy an extensive selection of freshly prepared salad, pizza, pasta, and grilled dishes delivered to your studio and villa, perfect for a cozy night with a movie or whenever you get the munchies.

Rock Spa® is more than a spa. It is a different state of being. An escape. Picture this, waves crashing against seashells on the ocean shore, Rock Spa® Maldives is your own slice of paradise. It’s a transformative realm of unapologetic indulgence.

Experience a musical twist on classic spa treatments in one our four private oceanfront treatment rooms, nestled in the zen beach of Hard Rock Hotel Maldives. Whether you prefer getting pampered with friends, your partner, or by yourself, we offer a variety of treatments and spa packages that stir your soul, relax your mind and rock your body.

At the oceanfront Body Rock® fitness center at Hard Rock Hotel Maldives, we have the latest equipment available for you to work or play as hard as you want. Join us and your expectations will be exceeded in ways you could have never imagined. Open 24 hours.

Maldives is alive with a diverse energy, and we want to plug you into the heart of the city. With an assist from local artists and our Vibe Manager, we have delivered a soundtrack to the city with your style in mind. Discover new local artist like Unoosha, Skyrock, and Flatmelon, or just use our guide to find the coolest places to eat, shop, and sightsee. The Beach Club will cool you down with tropical cocktails, and Alimas Carnival Stage is the place in town for shows.

Located only 500 meters across a footbridge from Hard Rock Hotel Maldives, the Marina @ CROSSROADS Maldives is an 800-meter lifestyle beach with a great selection of leisure outlets. Enjoy authentic American cuisine at Hard Rock Cafe Maldives with exclusive beach access, or The Beach Club, a world-renowned beach club from Ibiza. At The Marina @ CROSSROADS, leisure and entertainment activities are endless.

In addition to a variety of shops and dining outlets, CROSSROADS features a diverse collection of attractions and activities including Maldives Disscovery Centre, Marine Discovery Centre, The Event Hall @ CROSSROADS and The Koimala & Maalimi’s Junior Beach Club and CAMP.

Located right opposite Hard Rock Cafe Maldives, The Marine Discovery Centre offers one of the must-do activities for our guests - coral propagation program. Explore this immersive conservation experience dedicated to preserving and enhancing the Maldives’ unique marine ecosystem. This is an experience that is sure to astound Rock Stars of all ages.

How To GET HERE

Hard Rock Hotel Maldives is just a 20 minutes ride by speed boat from Male International Airport. To arrange the transfer, please email your flight details and the booking confirmation number to rsvn@hrhmaldives.com

Including applicable tax and fee, the round trip airport transfer is USD 148 for an adult, USD 74 for a child (6 - 17 years old) and free of charge for children below 6 years old

Join the daily tour guided by local staff at the Maldives Discovery Centre, located next to the Welcome Pavilion of The Marina, learn more about this beautiful island nation through interactive exhibition, and make your holiday in the Maldives more than just an island getaway. The exhibition experience takes is organized into five zones including a coral reef walk-through, the Maldivian's way of life, local arts and crafts and many more.

Traveling to the Maldives with kids is easy with Hard Rock’s Roxity Kids’ Club® and Teen Spirit®. Kids will enjoy hanging with the coolest crew around, the Roxtars—colorful, music-inspired characters that will keep them entertained so you can shop, eat, sleep, or relax. With both indoor and outdoor venues, the resort completes a family trip to the Maldives for kids with space for performances as well as grassy and sandy spaces outdoors for them to explore.

Classes for everyone (beginners and intermediate, kids, ladies). Existing BJJ Practitioners can bring their Gi and we offer free daily laundry of their Gi. No belt certification is offered.

Jiu-Jutsu, A Unique THING TO DO IN MALDIVES

Brazilian jiu-jitsu, also called The Gentle Art, is a martial art, combat sport, and a self-defense system that focuses on grappling and especially ground fighting. Originated in Japan and later developed by Gracie Family from Brazil, BJJ promotes the concept that a smaller, weaker person can successfully defend against a bigger, stronger assailant by using leverage and proper technique, taking the fight to the ground – most notably by applying joint-locks and chokeholds to defeat the other person. BJJ training can be used for sport grappling tournaments and mixed martial arts competition or as self-defense. Brazilian jiu-jitsu: it is not solely a martial art: it is also a sport; a method for promoting physical fitness and building character in young people; and, ultimately, a way of life.

Located within Emboodhoo Lagoon, Hard Rock Hotel Maldives is only a 15-minute speedboat ride away from the airport. 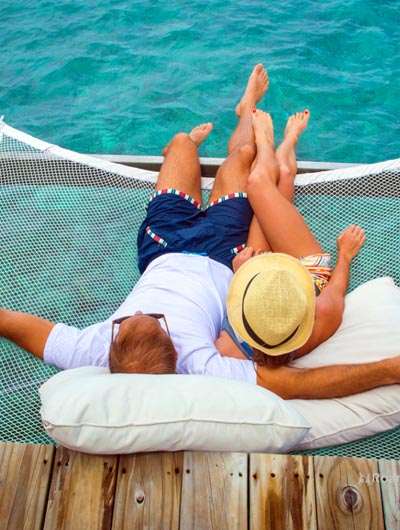